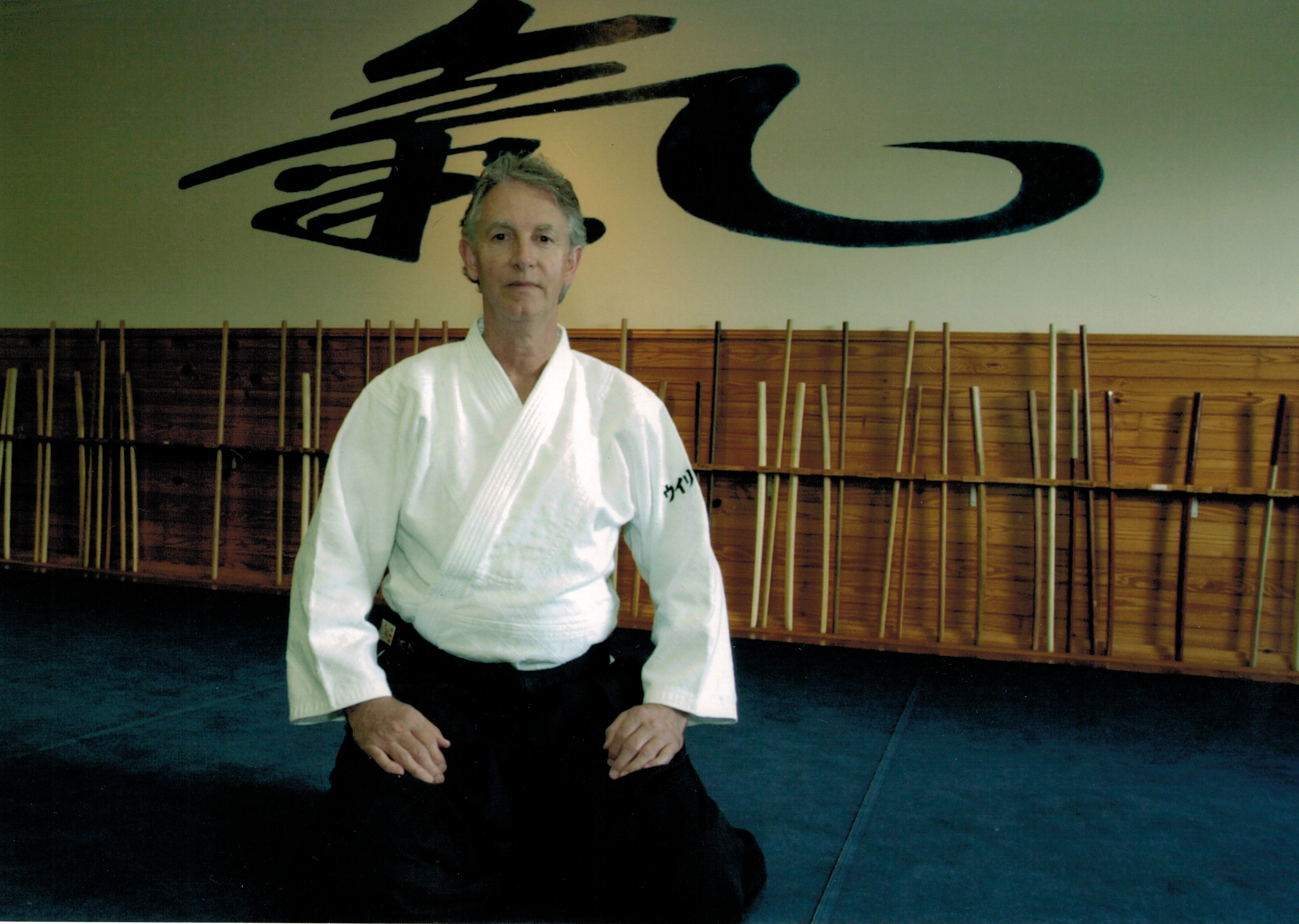 Sensei Michael Paul Williams was first attracted to Aikido while visiting New Zealand in 1974, where he attended demonstrations by Master Koichi Tohei. He was a serious student of Yoga and Wing Chun Kung Fu at that time. Returning to his homeland of South Africa, he began training with Master Jean Claude Delgueldre, Chief Instructor of Aikido in South Africa. He immigrated to New Zealand in 1978 where he continued his training with the New Zealand Ki Society. He moved to Australia in 1981, where he founded Aikido Ki Society Australia and established his first dojo at Griffith University in Brisbane. In 1985 he was appointed Chief Instructor of Australia by Master Koichi Tohei, Founder of Ki Society International. At that time Master Koretoshi Maruyama was the Chief Instructor of Ki Society International and taught many seminars in Australia and New Zealand.

In 1989, Williams Sensei relocated to Byron Bay in northern NSW where he built ‘Goshinkan Dojo’. Williams Sensei resigned from Ki Society International in January 2002 after a 28-year association with the organisation. At the same time he also resigned from Aikido Ki Society Australia, the group he founded in 1981. After re-establishing contact with Master Koretoshi Maruyama, Founder of Aikido Yuishinkai, Williams Sensei was requested to facilitate the expansion of Aikido Yuishinkai throughout the world.

In May 2006 Michael Williams Sensei and his family relocated to the Fiji islands to establish Aikido Yuishinkai with plans to build an outer island retreat, catering for aikido, yoga and other arts. However, due to the political upheaval in Fiji, he was unable to realise this dream. Williams sensei and his family have now returned to live in Byron Bay, Australia.

In December 2009 Master Koretoshi Maruyama honoured Michael Williams Sensei by presenting him with the level of 10th Dan level in the art of Aikido Yuishinkai.

In the beginning of 2014 Michael Williams Sensei resigned from Aikido Yuishinkai International and founded Aikido Goshinkai, named after his old ‘Goshinkan Dojo’ in Byron Bay.

Williams Sensei has trained in the art of Aikido for 40 years and has dedicated his life to spreading the principle of mind and body coordination and positive mind. He has a vast knowledge of the aikido weapons and has travelled and trained with many renowned experts of jo and bokken. He is an inspiration to many students around Australia and throughout the world. His dynamic, expressive teaching style reflects his experience, humour and compassion. 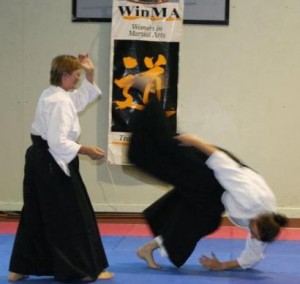 Elisabeth Andel was introduced to the art of Aikido in 1994 by Michael Williams Sensei during an Adult Education weekend course in his Byron Bay Goshinkan Dojo, the then headquarters of the Australian Ki Society. She was immediately impressed by the way the principles of Ai (Harmony) Ki (Energy) Do (Life path) blended seamlessly into daily life and then and there became a dedicated student of the art. In 2000 she was appointed Assistant Lecturer by Master Koichi Tohei.

When Williams Sensei joined Master Koretoshi Maruyama in 2002 as International and Australian Chief Instructor of Aikido Yuishinkai, yearly Seminar World Tours were organised for Maruyama Sensei from the Australian HQ. Elisabeth Andel accompanied Maruyama Sensei and his late wife Yasuko san as PA for 8 years attending over 40 international seminars, meeting aikidoka from many countries and gaining invaluable experience and insights into the art along the way, which she shared on her return as an instructor at the Byron Bay Aikido Club.

The main lesson Elisabeth Andel has learned and wants to convey is that all action starts at the centre, tanden, the ‘one point’ in the lower abdomen. When you move with centred, smoothly flowing ki, you can move the things around you as if they were part of you. This approach to dealing with problems transfers to daily life, daily actions and conflict resolution. Through focusing and directing your ki you are in touch with the universe.

A learner goes through many stages, from the purely mechanical learning of techniques, to becoming more and more coordinated, and thus more fluent and circumspect, being able to deal with many attackers at once. The experience becomes a meditation in motion, fully centred and fully aware.

In Aikido we try to win against our own weaknesses, not to defeat a training partner. Only this kind of victory is true victory. Masakatsu agatsu.

“Mark Evans has been studying Aikido since the early 90’s, has trained extensively in Aikido dojos throughout the UK, Australia, and Japan. He is a senior instructor at the Aikido Goshinkai headquarters in Byron Bay, and is a direct student of the founder Michael Williams Sensei. In 2010 he spent 12 months living in Japan as a soto-deshi with Taiki Okajima Sensei (10th Dan, Aikido Yuishinkai). His main emphasis in training is the understanding, and application, of the principles which Aikido is based on, which lead to ‘easy Aikido’ through relaxed strength. Although self defense is a key aspect in any martial art training Mark also teaches the practical application of Aikido principles in daily life.” 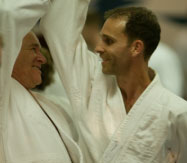 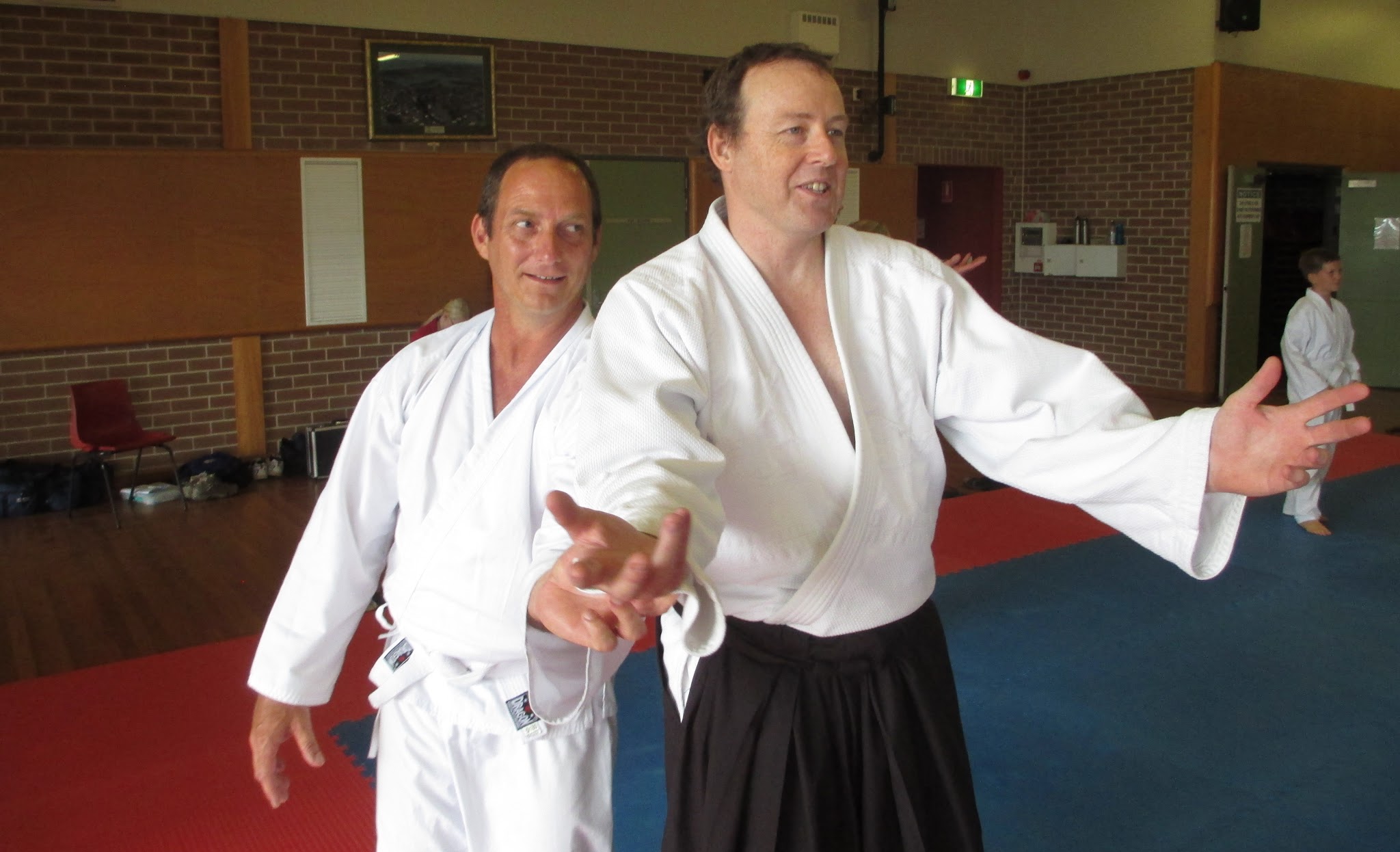 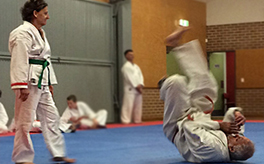