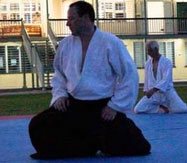 When a student truly considers Aikido; their path appears,

When a student has beginner’s mind; their path is a wonderland,

When a student contemplates and adopts the insights of their Sensei; their path becomes insightful, meaningful and productive,

When a student lets go of fighting mind; their path becomes positive,

When a student relax; their path leads to self victory,

When a student harmonise; their path becomes inspirational,

When a student extend Ki; their path becomes more than ones physical self,

When a student lives Budo; their path becomes a path to oneness,

When a student unifies their mind, body and spirit; their path becomes a path to enlightenment.

When I was a small boy I studied Judo for 2 years, later on I studied Karate for 8 years in large part with James Chong Sensei and Ju Jitsu with Ron Bartley Sensei and Bob Liedke Sensei for 5 years.  I also took opportunities to visit other martial arts dojos and look into many other forms.  I was a serious student training up to six days week at times in my life.  I learned much during these studies and had excellent Sensei.

I nearly started training in Aikido when I started Ju Jitsu studies, ultimately I decided at that time that Ju Jitsu was the founding arts and so I may find what I was looking for looking into the founding art.  In hindsight I consider this same decision differently now. I will use this parable to explain – I like driving cars while it would be interesting to have a drive in a model T Ford I would not what to drive one every day, I like the refinement of the modern car.

As my search continued I increasingly knew my path was Budo, but while the other arts I had studied where considered Budo arts I felt conflicted and constantly drawn into the parts of those studies that touched on what I later found to be Aikido studies.

In 2008 I was introduced to Aikido and understood this was what I had been looking for during my other studies. In Aikido I found purity of what I was seeking without conflicting ideas that had concerned me about my other studies.

Since starting to study Aikido I have been very fortunate in being long term student of Michael Williams Sensei, Elisabeth Andel Sensei, Mark Evans Sensei, Bob Liedke Sensei and Travis Liedke Sensei.  I will be forever grateful for their instruction, insights and patience.

A message to Aikido students (new and old) –

Aikido is many things to many people. People are drawn to Aikido for one reason or another, as they study their understanding grows as does their reasons for studying Aikido.  The journey to understanding the different aspects of Aikido is an exciting journey that has no bounds.